Is the Cobb/Cobb a legit t206 back type?

Is the Cobb/Cobb a legit t206 back type? 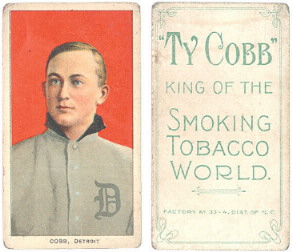 I don't believe the Cobb/Cobb is a T206 card. The dead giveaway is the glossy front.

I do believe the Coupon Type I's and Red Cross Type I's ARE T206 backs however. I believe they were simply given other "designations" b/c they were issued in other series after T206's were issued (which are definitely different issues - just look at the blue captions).

I am not a t206 guy.
And I'm not sure what the "rules" are here for making this determination. For example:

I guess that the pictures used must be selected from a common starting pool of images.
Apparently different color inks and font types can be used on the card backs.

I don't see why that latitude should not be extended to the fronts. Specifically, if slightly different fonts were used, that really doesn't change anything, nor does different color fonts (or does it?).

Do all advertising companies have to be one of the ATC owned manufacturers? I do not see why that should be.

Heck, I wouldn't require the manufacturer to be a tobbacco maker, if he used images from the same pool, with about the same fonts, borders, card size, etc. He could be a candy maker, a food product producer, or whatever.

The set is the cards, not the manufacturer - or is it?

Generally, the manufacturer is the determining factor in deciding what a set is.

Burdick seems to place cards in sets according to their fronts. How else can you explain his e92 designation. There are 4 different manufacturers with 4 very distinct set of players for each. The same can be said for the t206 set. I doubt ATC placed different players with different brands to try and get smokers to try new brands. As witnessed with the SLer cards, they were generally issued with the brands from down South, so you can assume that players were placed with brands based on where they sold best.

It would be interesting to see what the best sellers were in various cities and then see what players were issued with those brands.

I do not share this point of view. However, when I started to address the subject a couple of years ago, I got so much heat, that it was not worth the uphill effort.

Edited to add:
Yes, it would be interesting to coorelate tobacco product sales by region with players selected for those products.
And the 4 e92 sets along with People's Tobacco, e101, and perhaps the interplay with e90-1 and others is a bowl of spagetti which needs some sorting.

e92s are pretty obvious, especially Nadjas. Nadja was based in St Louis, hence all the St Louis players with Nadja backs.

Gill, I'm with you. Changes need to be made to the way vintage sets are designated. Yes, Burdick was a great pioneer in cataloguing cards. Contrary to sainthood bestowed upon him by collectors, that does not mean that he work was perfect and people should not be opposed to changes just because it is something different from what Burdick originally did.

The whole E, T, R, N, etc system is antiquated and many times makes no sense. We are better off just doing like Bob Lemke and SCD started doing, listing sets by manufacturer. This makes much more sense, not only from a common sense stand point, but also from a friendliness standpoint for people that don't know what they are looking at.

Image inherting a collection of cards not knowing what they were. If the catalogues listed sets by the Burdick system, then someone looking at a t206, e92, or other such set wouldn't know what set to look at in the catalogue.

You can change the system and still pay homage to Burdick and groundbreaking work he did.

Another of the inconsistancies of Burdick, why were Pirates listed as a t215? While most of the set is similar to type 1 Red Cross t215s, it was issued by a foriegn producer. So there doesn't seem to be any rhyme or reason to what consitutes a new set for him. Would be great if he was still alive or someone knew what his thought process was.

Where's the option for salesman's sample? That has always been my theory.

Lee, you may very well be correct (that was my thought exactly several years ago - guess I still stick with it). With the very LIMITED quantities that survived AND the fact that five came from one source (who's relative was a store owner, who probably received the "samples" and simply saved them).

Then again, there aren't many Ty Cobb tobacco tins around either. Were these issued or samples as well? If these were issued (especially with the Cobb back card inside), then they DEFINITELY were NOT very popular, as there aren't many survivors of either. Maybe they were a "test issue" limited to the NC area or something and the test proved unpopular, as the brand was unable to compete with the bigger brands of the day?

I don't remember exactly what type of tobacco was in the Cobb tin, but I seem to remember it was loose, like Polar Bear. If that's the case, then we should be seeing stains on some of the cards like we do on Polar Bear cards.

I added the "salesman's sample" option for bowlingshoeguy

I think it's an interesting and plausible theory.

I think it's an interesting and plausible theory.

That was my vote. It makes sense.

Hi guys. I have never seen one myself, but Mark Macrae says that based on the physical card, it can't be part of the T206 set--the glossy front is only part of it. He had no opinion as to what it was (salesman's sample, a set made in Georgia, etc.), but did not feel it was part of any other regular printed set, either. It isn't a phony; it just isn't a T206, or a part of another set (besides its own).

Good to see ya Julie.

It is GREAT to see Julie here! I, for one, always enjoyed her posts on Net 54. Also, at least she doesn't have to worry about being harassed on this forum. The attacks on her by a few on Net 54 were uncalled for and something should have been done to those who were attacking her for no reason (ie: they should have been banned)!

Julie - are you back into collecting these days? I hope so, as you are one of the nice people in the Hobby and your posts are always interesting to read! Anyway, again, it is great to see you posting and I hope you and your family had a wonderful holiday and everyone has a great new year as well.

No, in fact, I finally quit collecting J

apanese cards as well. But I still like to yak about them.

Just make sure you shave that yak. They shed and the wooly hair really gums up the works.

Par usual I am going to be the minority on a chat. I guess that means I am usually wrong but hey someone has to be. I remember getting upset at Jay Miller during my PSA/Magie issue because I was on edge and all poor Jay was doing was being devil's advocate to try to help sort out the situation. We have since become very good friends. <P> Anyway, my opinion is the Cobb back is part of the T206 set. I am going off of the font set and color of the name and team on front with the image. I believe the red cross has a different font and actually a brown print color instead of black? I am way too lazy to get mine out. Welcome Julie! It is great to have you hear. I hesitate to be on the opposite side of Mark but I would be curious as to what his reasonings are of why the Cobb back is not a T206. Scott's statement is a good one, a T206 should not be real glossy so maybe I will be swayed over to the majority side. <P>Now you guys/gals are going to kill me! Nothing personal Jay but I much prefer Burdick's cataloging over Krause. I think the Krause book is a POS. I believe it could be good but there are many issues that I cannot find by alphabetical order. Or I should say, they use the first part sometimes and the 2nd part sometimes of a 2 part named issue. Example: George Close Candy is listed by Close, Berk Ross is listed by Berk. Also, I would like to see the front section strictly 1947 and older. Put the Topps and Bowman stuff in the back with the shiny stuff. <P>Please take it easy on me here, I am a bit fragile. Thanks Dan.

We are as brutal as people would have you believe. My reputation of attacking new comers for no reason has been disproven here

The glossy front and the lack of distribution as major factors in against it being a t206. The other major one is the fact that there was a small find of them, leading credence to salesmans sample theory.

I know u r a good guy Jay! Yes all valid points and the latter is very interesting. Robbie Lifson was happy!

Hi Jay, I slept on this and came up with this possible scenerio: Many T206's are found with the same backs in a group as Hunt's recent Drum find. People used the same brand tobacco usually. If the Ty Cobb brand tobacco only ever included 1 card and that person only used that tobacco, then it would make sense that 5 or 6 were found together. Just a thought my friend. <p>Hey, what ever happened to Mike and John from Full Count ? Dan.

Interestingly, the forum is nowhere near a consensus on this question yet. The mystery surrounding the Ty Cobb back lives on I guess.