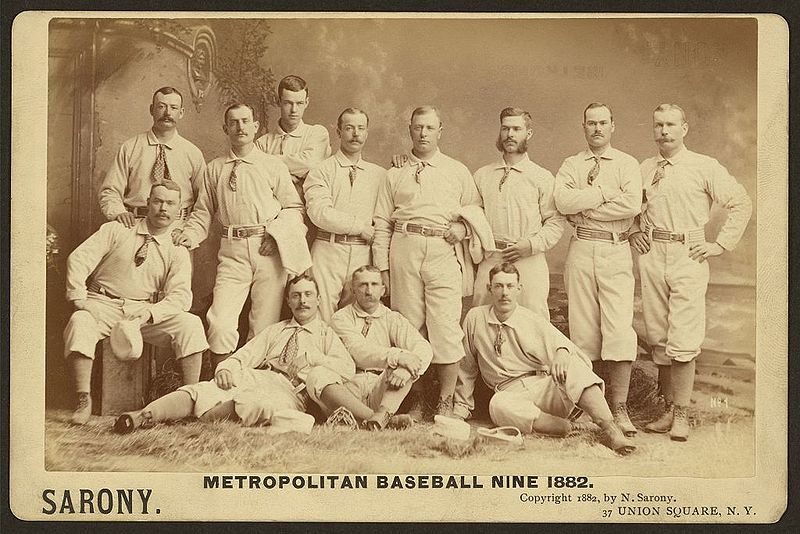 1882 Metropolitans---Player Identifications provided courtesy of Gary Livacari.
Top Row, L-R: Jack Lynch (P), Charlie Reipschlager (C/OF), Tip O'Neill (P/OF), Eddie Kennedy (LF), John Clapp, John Doyle, Frank Hankinson (3B), Steve Brady (OF/1B).
Bottom Row, L-R: Tom Mansell, Terry Larkin, Candy Nelson (SS), Long John Reilly.
Image courtesy of Bill Burgess.
Team summary by SABR Steve: The 1882 Metropolitan Baseball Nine was a team that played in a two-team league called "The League Alliance" with a club simply called "Philadelphia, of Philadelphia" in the 1883 Spalding Guide. The guide refers to Metropolitan as New York. New York won the league title with a record of 14-6 and one draw. The two clubs also played an additional twelve exhibition games, each with 6 victories. Throughout the 1882 campaign the two clubs met National League clubs between April 12 and October 27. Metropolitan (or New York) had a 29-42 record against the NL and would have finished in 8th place had they been a member, several games ahead of Worcester. Philadelphia was only 16 and 44 vs. the NL.

Many of the players in this two team league continued in the NL or AA to greater stardom. These players become quite familiar to you as you explore the 19th century baseball history by playing a baseball simulation of that period where each player gets to draft his team, identify starting pitchers, relievers, starting lineups etc. We have an opening or two right now in this free league. Talk to Jay in order to sign up.

That cabinet is absolutely stunning

Look at those chops!!!

Awesome cabinet. That is beautiful. When you consider how old some of this photography is, it blows your mind.