My observations on e107's is that they generally seem to be in rough condition
I wonder why that is?

Now here is a thread that I can get behind...

You are correct. E107s are very commonly found in rough condition. Since some people are very condition sensitive, they are not for everybody.

In general, E cards are rougher than T cards because they were included with caramel products instead of tobacco products. That means that they were more likely to be in kid's hands than adult's hands (ie go into a pocket vs. into a cigar box). Being that E107s are among the oldest caramel cards, they are more rare and fewer have survived. When fewer have survived, you kind of have to take what you can get. They are not the most scarce thing out there (see Alpha Engraving, Allegany, and Just So for that), but the scarcity, player selection, and set importance to the hobby makes E107s highly desireable to some collectors (like me).

With other card products like Goudeys and T206, they are plentiful enough that collectors can afford to be more particular about the grade in which they collect them. Below, I posted an E107 Fred Clarke. (Thanks again, Eric). I would love to upgrade it, but it is one of three that have been graded. Two of the 3 were graded "poor" (SGC 10) and the third was graded "fair" (SGC 30). The other two are in one collection and are probably not going anywhere anytime soon. So, that leaves options pretty thin if you want that card. (and that is why the one I have is so rough)

It actually amazes me how well some cards have held up in the 100+ years since they were released. A lot has to do with the way that the cards were distributed. For another example, E105 Mello Mints were inserted into the packaging in such a way that many of them folded in half. Though much more common (due to the numbers produced), 1914 Cracker Jacks were stained due to being inserted into the box along with the product. Many of the "D" cards were inserted in bread packaging and were frequently damaged in their original packaging as well. So, the way that cards were distributed plays a big part in the condition of how the cards have survived the last 100 or so years. I would imagine that over time, some have been thrown away not just because "mom got rid of them", but also because "nobody would want that thing in a condition like that."

Here are my roughest E107 and my nicest E107 (in terms of eye appeal). I have a few in higher grades, but these two represent the variance of condition in my personal collection. To me, it is interesting of how much more accepting I have become of cards like the Clarke due to scarcity.

Agreed with what has been said...since they were the 1st major set of the 2oth century...and were issued w/candy...targeted towards kids...they were probably handled more as well...and shown off to friends who would grab them...dunk them in coffee grinds...shoot bb guns at them...tack them on the wall...and then pull them off tearing them.

Not sure what happened to this card 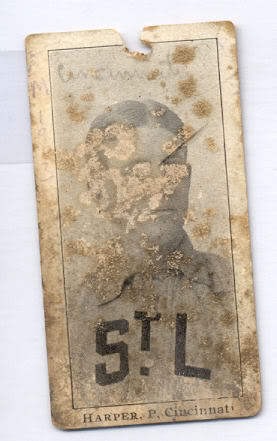 E107s were also printed on a thin paper stock. Here's my example, a rather nice specimen from the set. 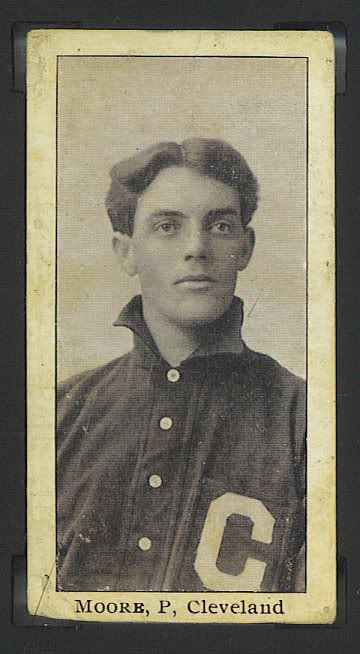 Zach, you need to post that in the match game. We need more Earl Moore cards

How can you not love the E107 set? The player selection is phenomenal, with a bunch of aging 19th century stars bridged by a healthy stock of up and coming HOFers of the 20th century. Plus I really enjoy the simple yet elegant design and photos (many of which are unique to the set).

I've pursued E107's ever since I first learned about them. I've been lucky enough to own a few HOFers (Plank, and Joss currently) and a handful of commons too. Came real close to acquiring a Mcgraw but the trade fell through. I'll never forget that night, must have been about 8 years ago now, that Levi Bleam (707sportscards) listed a bunch of E107 HOFers on ebay with super low BIN's....a nice Lajoie for $1500....a stained Bender for $500....McGinnity, Flick, and several others for around $500 apiece too. I didn't have the $ to pull the trigger at the time

It is a significant set, but it is hurt by two things, black & White pictures and many of the players are pictured in street clothes. For those of us that are into the history of the game and history of the cards, this is a very important set and will hold it value, but it could do better if it looked more like the n162 and A&G sets.

I personally think the simple black and white photography is much better looking than the cartoony issues like n162.

I'm with Jeff on this.
I like the B&W portraits, but I wouldn't call N162's cartoony.
I would call N284's cartoony though.

different levels of cartoonishness, n284's are definitely way up there!

if the plank is low i might just downgrade

That Keeler sold too before in Mastro a couple of years ago, thought it went for way too much then and is over-priced now. Not even his rookie.

Jeff, What year is that beautiful Cabinet.
Is that yours?

I once read on the other board someone claiming most surviving e107's come from a few distinct sources and are easily recognizable based on their lineage. Does anyone know any more details about this. I definitely can see similarities in damage and wear amongst groups of them.

TheBig6 wrote:Jeff, What year is that beautiful Cabinet.
Is that yours?

ullmandds wrote:I once read on the other board someone claiming most surviving e107's come from a few distinct sources and are easily recognizable based on their lineage. Does anyone know any more details about this. I definitely can see similarities in damage and wear amongst groups of them.

I've also heard this, Scott B would know all the details.

Is there some blank back ones Type1 or 2, or am I thinking of another issue

I think the type 2 is blank back. Type 1 come with or without the Breisch-Williams stamp on the back

Type 1s are the standard cards that you see around. They come with two different backs (blank or the "one of a hundred fifty prominent baseball players" - similar to my avatar). Some type 1 cards have been found with a purple "The Breisch Williams Co." overstamp on the back as well. These are yet even more rare and command a premium. Given the nature and quality of the purple stamp (also plagerized on my avatar), these E107 cards were probably used as some sort of redemption by Breisch-Williams, thereby "cancelling" the cards by adding their stamp. There are 146 players have been found in the Type 1 set, but some variations in team name push the total number of cards over the 150 number.

Type 2 E107s show the same image as the Type 1s, but are on a much thicker and different card stock and are always hand cut. Popular theories are that they were cut from an advertising display or box of some sort. None have the 1 of 150 back. Instead they are all blank backed. Of the 23 HOFers found in the Type 1 set, only Lajoie, Delahanty, Keeler, and Waddell have been found on Type 2. In fact, only 8 players have been found on Type 2 cards at all. Interestingly, a single Delahanty Type 2 bears the Breisch-Williams overstamp on the back. So, either someone snuck a display cut card through with their other Type 1s during redemption or the hypothesis of Type 2s being cut from an advertising / display is invalid. I personally do not own any Type 2s that I can show for display since I prefer Type 1s, but there are some out there who prefer the Type 2s over Type 1s due to their scarcity of player selection.

I couldn't justify going any higher on it and ended up as the underbidder.