There was a Lipsett Auction a few years ago in which he sold a lot containing several of these. Quite a difficult card, because the cereal boxes were never released to the public. They were typically served with breakfast in hotel restaurants or trains. And the kid would have had to grab the box from the table, and keep it until he could deposit it in his room. These cards are usually not found in top condition, the Medwick shown went very cheaply, I think. Medwick is the player I sold (to a Medwick collector).

Neat box. I don't have much to add, but I'd like to post scans in the thread for future reference: 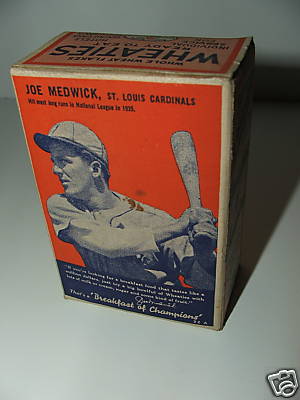 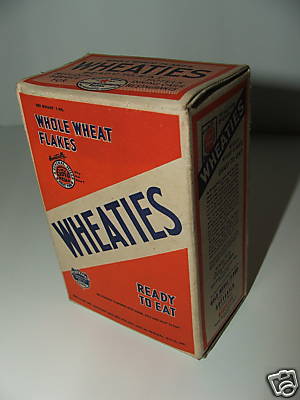 Following the SCD, the card looks more like a Series 14 than 15. Medwick is in Series 15, but the SCD describes those as having red, white, and blue backgrounds which look to be in rings around the player. Is the SCD correct? Does anyone have any Wheaties Series 14/15 cards to post?

Well Glen, if I remember correctly, some of the Series 15 cards came with a white background bordered by a red and blue line around the (well, the freakin') border; much like the Series 7. And there could have been other card designs in the Series 15. Old Cardboard shows an example of both the Series 14 & 15; so you can easily see how similar their appearance is.