Ran across the above photo in research on Tacoma baseball 1924. Obviously the Bambino in center, but was shocked to see bottom row, second from the left, looks like "Chief" Bender. Then I ran across an article on a Jimmy Claxton no-hitter pitched versus the 23rd street Skidoos (June 22, 1924) in which "Chief" Bender made two sensational outs in center field.

Moved this thread to hobby talk; technically, it's on-topic.

You sure that's Bender on the bottom row second from left? I don't see it, but maybe it's just a weird pic of him. 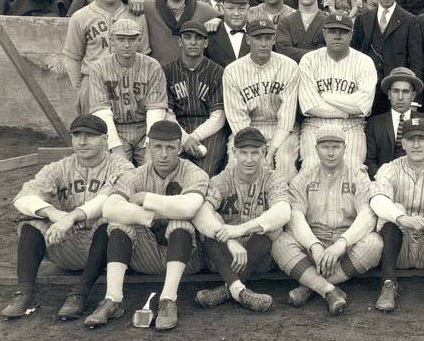 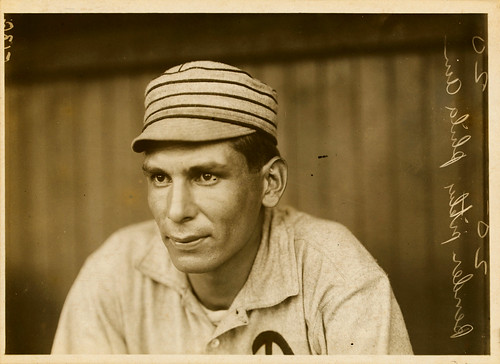 That is what I am trying to find out, but nearly positive it is THE Charley Bender. The Tacoma Industrial League in 1924 was pretty damn good baseball (step below PCL), and the uniform indicates "LWA", the Tacoma Longshoreman Union. The others are from teams in the same league including the K Street K's, Tacoma Avenuers, and Fern Hill Chicken Raisers (I'm serious). Bender appears numerous times in articles on the Stevedore team, but unusually only in the outfield (one relief appearance). He couldn't hit a lick, but seems to appear regularly for sparkling defense.

No way that is Bender. Complexion looks too light and if you look at the eyes, Bender's brow is very straight. The brow is noticeably slanted in the other pic.
_________________
Jay

I don't see Chief Bender in that picture.

OK, trust your opinions (no indication on rear of original). Now I am having a hard time. Research can be beyond frustrating. A gentleman named "Chief" Bender played outfield for the Longshoreman Stevedores (1924). He did not hit well, and had one relief appearance (played in 30 of 33 games). Is anyone familiar with the REAL "Chief" Bender's bio in 1924?

Bender appears to have been in New Haven, CT. This is the second time I have run into this, the first being Ty Cobb in Nevada. Ty Cobb (b.1915 - ?) was a Nevada State Journal sports writer in the mid - late 30's (I believe his son is a current State Rep). Always fishing, sorry for the trouble.

FWIW - The first half of 1924 Bender coached at Navy. He signed with New Haven on July 3rd.