Why is Bid McPhee in the HOF?

Why is Bid McPhee in the HOF?

Can someone explain to me why Bid McPhee was elected in 2000 but people like Deacon White arent in there? Just wondering as I was very surprised to see he had been elected.

My guess is something to do with his fielding. 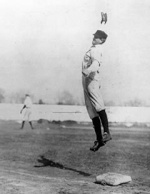 To be certain there were a lot better candidates. Most people were expecting someone like Bobby Mathews, Deacon White, Mike Tiernan or Harry Stovey to get in. McPhee was shock to everyone but the veterans committee.
_________________
Jay

It was obviously his fielding it was at a high level through his career. I don't know if him being one of the last player not to wear a glove had an effect.

I think sometimes we put too much stock in hitting and seem to forget about the fielding because it is tough to put into numbers. You have to wonder how many good hitters could not have a career because they could not field until the DH era came around.

There are definitely too many players in the HOF that could hit but couldn't field a ball if their life depended on it. There are already enough one trick ponies like Killebrew and Kiner in the HOF. We don't need anymore.

It cracks me up that all these people are upseide because Mazeroski finally got in. He's considered one of greatest defensive second basemen ever. So what if he didn't hit 20 HRs a year. As Lee pointed out, since there isn't an easy or accurate way to measure how many runs a player saves defensively, these players get overlooked.

Here's hoping that combined with the steroids, it's enough to keep McGwire out of the HOF. He is the epitome of the one trick pony. He couldn't field, and really could hit very well either. He basically hit a HR or nothing.
_________________
Jay

That makes me think of Johnny kling. He doesn't have great batting records. However his contemporaries considered him the best catcher of his era. The one year the cubs didn't go to the world series between 06-10 is the one year kling sat out. He seems like he should be a hof candidate but I'm sure all the modern day batting freaks will keep him out.

Couldn't disagree more about Maz and Killebrew. Maz is the epitome of a one trick pony--possibly even a one at bat pony. The guy hit .280 when he was 20 and .275 a year later, and never reached even that very modest level again. Thus he not only had no pop, he had no stick. Even Killebrew topped .275 four times, along with his near 600 HRs.

Maz also stole 27 bases, i.e. he had no wheels. He was automatic in the field and especially adroit at turning the DP, but his range was not spectacular. He basically was flawless and flareless in the field. If you think he put butts in the seats or had more of an influence on his team's success than Killebrew I believe you are greatly mistaken. Killer was no gold glover, but he was no buffoon in the field either, and was a better first baseman than most acknowledge (his lifetime fielding pct at that position is higher than Stargell, Carew, Greenberg and, believe it or not, Lou Gehrig). He led the league in HRs six times when there were guys named Mantle, Maris, Howard and Robinson playing. He is every bit deserving of the Hall. Not Maz, who is remembered mostly for one swing, and whose defense no matter how strong, does not make him a HOFer.

In the nineteenth century, fielding was more important than it is now. There were a lot more errors, so a super-slick fielding second baseman who fielded a lot of balls could make a big difference. By today's standards, fielding is only half as important as hitting. Back then, they may have been almost equally important.

Also, I think McPhee made it because he was simply the best at his position. There are no other 19th century 2nd baseman in the hall, so probably the Vets. Committee felt it needed representation.

It's a shame that they weren't more selective about the Hall in general... too many sentimental picks. It's getting crowded in there!

If you've read any of the books and papers on the 19c game, baseball was originally played to showcase fielding. That is why in the early game, batters could ask for the pitch to be in a certain location. The rules makers wanted to ensure that the ball was put into play.
_________________
Jay