I have a few questions about this set Like, which of the three types which is the toughest. Also are all the poses in these 3 sets the same poses as T206's. Which of the types have glossy finish if not all of them.

Any info you can share on the set would be much appreciated.

TheBig6 wrote:I have a few questions about this set Like, which of the three types which is the toughest. Also are all the poses in these 3 sets the same poses as T206's. Which of the types have glossy finish if not all of them.

Any info you can share on the set would be much appreciated.

Type 1's are definitely the toughest of the three and carry a premium. These were released in 1910 and consisted of 68 players taken from the T206 set (National, American, and Southern League players). The script on the bottom resembles that of T206's and some people actually consider them another brand of T206's. 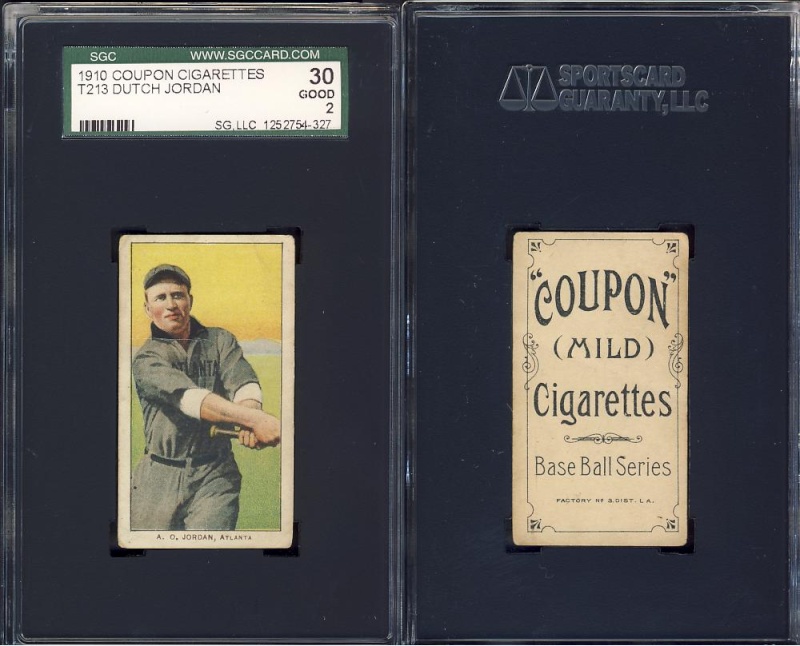 Type 2's are the most common and the cheapest of the three. These were released in 1914. Same images as T206's and blue text on the bottom 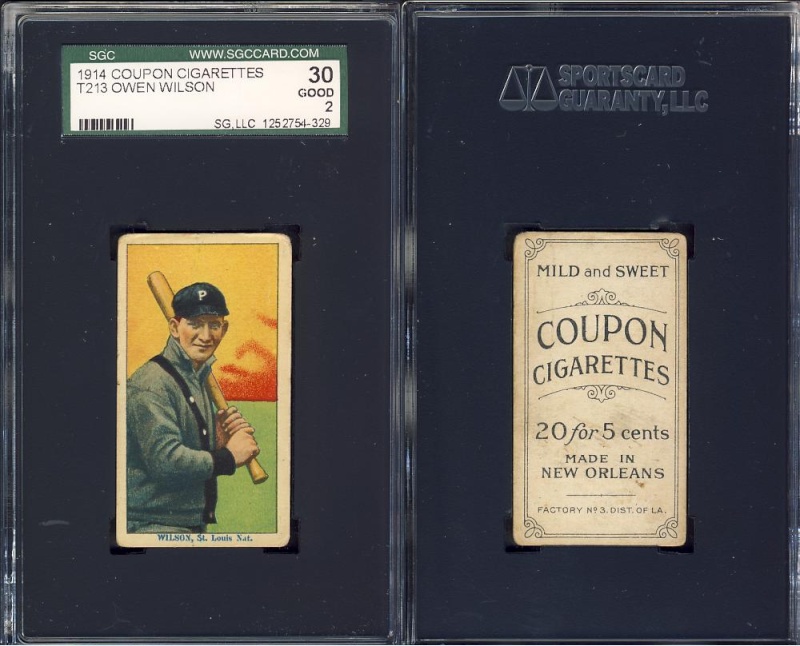 Type 3's were released in 1919. These are pretty tough to find. Same images as T206's, and are believed to only have been released in the Louisiana area. This is also the last of the traditional tobacco card sets. Some contain overprints such as this McGraw. Blue text on the bottom

Thanks Eric,
Those are nice cards, are they yours?

Only the McGraw is mine. The other two belong to another collector (we split up a Mastro lot and he got 2 type 1's and a Type 2.).

Another point about the type 3's is that they often (always?) have narrower borders, similar to the American Beauty T206's. Whether or not this had to do with a difference in the cigarette packaging is unknown to me, although it does seem likely.
_________________

I believe the type 2's have a glossy front on them. They are very susceptable to cracking and commonly have terrible fronts due to the glossy surface.

As always, anyone can chime to correct me if I'm wrong, it wouldn't be the first time I made a mistake.

I agree with what Eric said; type 1's are really tough, for a short while I contemplated going for the set...in the three months since I decided to try, I have seen zero and stopped.

In 2002 I picked up a VGish Type 1 Cobb (red portrait) for $300ish on ebay. The seller didn't show a back scan in the auction but mentioned that it was a coupon back in the description. I don't think the rarity of type 1's was as renowned then as it is today. I stupidly sold it a year later for $450 BIN

That one especially. Last sold for 11K

Wow Ben! That would be a nice card to have back...do you have a scan?

Ah, the good ole' days when eBay actually had auctions...I wish those days were back.

hanksta wrote:Ah, the good ole' days when eBay actually had auctions...I wish those days were back.

Man, I was thinking about that yesterday. eBay used to be so cool, but it's become totally lame. I feel such shame and disgrace for running a bunch of fixed-price listings right now. I'd obviously love to get a few reasonable best offers, but I'm also anxious for the 30 days to just expire and relaunch a few of the listings as true auctions. I miss the thrill of a good auction - both as a bidder and a seller.

hanksta wrote:Wow Ben! That would be a nice card to have back...do you have a scan?

No, sorry Sean I don't still have a scan. I should have kept better records in my earlier years on ebay.

I knew it was a pretty tough card, but I remember thinking that the type 1 back wasn't that big a deal. I recall the consensus at the time being that the T213-3's were the toughest, and the ones with the overprint were extra extra special.
_________________

Yes, all the poses are the same. But there are a number of caption and uniform differences. Most of them are just team changes, but the Donlin card is an interesting exception. The caption on the t213-2 Donlin reads ".300 batter 7 years": 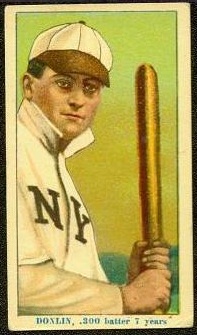 Another interesting detail is players that had retired by 1919 (the date of the type 3 issue) show their first name or nickname in addition to their last name. For example, the Elberfield T213-3 caption reads "Kid Elberfield" in full, unlike the type 1 or 2 coupon or t206 which shows just the last name and team like you'd normally see. I don't have a scan handy, but you can see a b&w photo of the Elberfield in the t213 section of Lipset's Encyclopedia.


The uniform differences between t206's and t213's were related to team changes. Street is a good example of this, with the "W" on the Washington uniform removed on the t213-2 due to his move to Nashville. I had a few follow up questions re: the type 3 "overprint" bars.

-Why do these bars appear on the t213-3's exclusively? What function did they serve?

-These "overprints" backs have sold for significant premiums over the regular type 3 backs. Do they deserve a premium? If so, why? 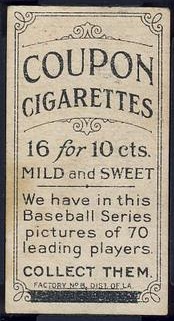 As Lipset noted, the T213-2s were issued over three years. Here is a Chief Bender captioned for the Phillies, who he did not join until Feb. '16. Bender appears for the A's and Balt Feds (Terrapins) in this same set.

Germany Schaefer has three cards in the type 2's also noting team changes. His first card showing him with Washington is not difficult to find, then he has another with Kansas City of the Federal League (a team he didn't actually played for) but the card still shows him with a "W" on his shirt, and then another version with him on N.Y. without the "W" on the uniform. He was bought by the Yankees on Jan. 21, 1916 putting this as his third version in the series. I can't remember for sure, but I think the N.Y. version is quite tough. Can anyone confirm this?

This continues to be a very Informative Thread , I have a much better feel for the set now.

Thanks to all that have Chimed in, so far

This is what makes this forum great, Lets have more threads like this on other issues.

Knowledge is Power, somebody said.

I had a few questions earlier on in the thread about type 3 overprints that kinda got lost in the shuffle. Any ideas or theories?

fisherboy7 wrote:
I had a few follow up questions re: the type 3 "overprint" bars.

-Why do these bars appear on the t213-3's exclusively? What function did they serve?

-These "overprints" backs have sold for significant premiums over the regular type 3 backs. Do they deserve a premium? If so, why?

I don't have anything to add to the discussion, but I thought I'd share a few scans.

fisherboy7 wrote:The same caption/uniform change occurs with Evers on his t213-3, where the "A" on his uniform dissappeared after he moved from Philadelphia to Chicago in 1915. The caption on Evers' t213-2 also reads "Chicago" but his uniform still shows the "A" as you'd see on his t206 portrait card.

You are mixing up Evers with Eddie Collins there. Evers' T-213-2 card shows him in his Cubs uniform while the caption reads Evers, Boston Nat. It was Collins who went from the A's to Chicago (AL).

[EDIT]: Since I just bought the Evers card, here is a look: 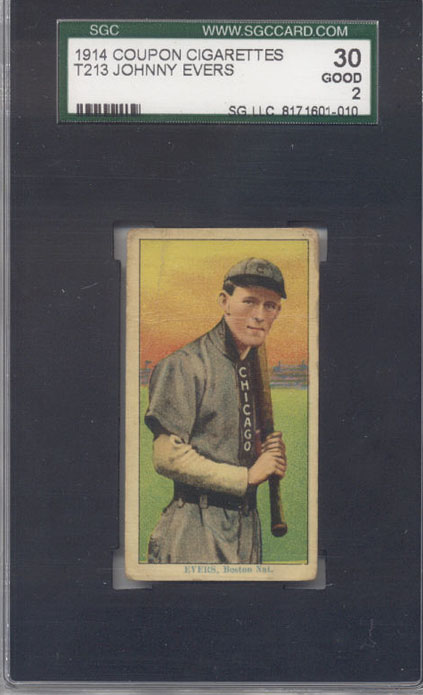 Thanks for the correction, Blair