All right you T205 collectors

All right you T205 collectors

I think I'm giddy as a schoolgirl, but what am I missing about this card I just sold, for what I figured to be twice its value:

I know the mouth open variation is tougher, but is there something else I'm missing?

I would have happily bought it from you for half the price to replace the one I have in my collection which is very nice but deemed slightly trimmed by SGC.

I think the card went for a pretty fair price, actually. It is a tougher variation and one that isn't easy to find in VG or better condition in my experience. You had a couple of bidders who wanted it and bid it up to its graded price.

Thanks Scott. I guess I'll wait til the cash is in hand and then be thankful. This windfall thing is completely new to me.

It looks like you had a nice group of bidders, only one bidder bid once and wwas done. To have more than 2 active bidders in an auction is always a good thing.

Heck, in 6 months you might be saying "I sold it too cheap".

Interesting result - you had 3 guys bid over $300 on a raw card that's scarce but not rare, by any means.

I'll posit my guess, which I fully acknowledge could be wrong for this case. There are now many buyers who will take a run at raw cards with the idea of grading and then flipping them. It's gotten to the point of stupidity, imho, and this card is a good example. It's likely going to grade as VG, with an outside shot at VG/EX, in which case, they'll be lucky to recoup the $355 (+ grading fees) they spent. We see it time & time again - lots of quasi-dealers want to "stock their inventory".

I used to think that is was always worth getting a card over $50 graded if you intended to resell it, but that may need re-thinking. I had the same selling experience with a bunch of crappy raw T204's about 2 months ago - they sold for much more than I expected, and more than 2 SGC 30 examples.

Of course, the guy who won this Bresnahan may just be a new collector who really wanted to win it.

BTW: if every seller scanned cards and showed them the way Todd did, they'd almost certainly get higher prices. Those are great. 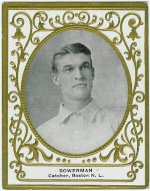 Well guys, I was the underbidder on the card at $350.99. I thought I had a pretty healthy snipe set to win the card, but you never know. Tough T205 to find in that condition.

I agree with Bill. That scan will draw in more bidders. The ink quality is very strong and from what I can tell, there is little or no creases. I think it sold for the right price.

Thanks again guys. Now I just hope he pays.

Similar topics
» Type card collectors....anyone seen one of these before?
» Vintage Card Match Game V3.0 - Rd 3!
» 2 Questions for All of You OJ Collectors
» A survey for set collectors.
» Calling all stamp collectors....