Here's a fun idea I've been mulling over for the forum. I've seen this done on other forums with great success. This post is simply to gauge if there would be enough interest to make it work here. What I propose is as follows:

A group forum members come together and participate in a draft, compiling a "fantasy" baseball team consisting of players from all eras of baseball history. A draft order would be selected randomly, and each team would pick in that order until everyone has compiled a full lineup of batters and pitchers. There is no limit to the players can be picked - any era of baseball history, 19th century to present. But they can only be picked once, and you'd only select one player per position. There would be a lot of strategy involved in which positions you'd want to fill at first, and which players you'd pick (obviously). So conceivably, if I had the #1 pick I could select Babe Ruth, the person with the second pick could select Walter Johnson, and so on. Here are the positions each team would have to fill:

So there would be 16 rounds in the draft. I think we'd need a minimum of 10 teams to make it interesting (preferably more). The draft could be held in a separate sub-category of the fantasy sports zone, which I would set up for us. Once the draft is finished, we could discuss the relative merits of our teams, which teams would win if they were matched up, and which team would be the champ. Could turn out to be very interesting and a lot of fun too.

What do you guys think? If you're interested, you can reserve a spot in the draft by posting here.

I'd have to look at my Diamond Mind baseball game, but I think you can set up leagues with players you draft and then play out the league.

For those that have never heard of Diamond Mind, it is easily the best baseball sim out there. It's not a twitch game. It's a strategy game where you decide when bunt, steal, H&R, change pitchers, etc. It also takes into account park factors. It can also be set up to play games automatically.

A rookie who only got into one game and in four at bats managed a single and a walk.
Does he count as having among the highest lifetime on base percentages of major leaguers, along with a .333 lifetime BA?

Count me in....Maybe we could make up a schedule and Jay can plug our teams in to play automatic games to see who comes out on top?

slidekellyslide wrote:Count me in....Maybe we could make up a schedule and Jay can plug our teams in to play automatic games to see who comes out on top?

Sounds great Dan. We will need at least 10 teams participating so hopefully others will jump in. It's going to be a lot of fun. The draft will take a few weeks minimum, so we'll need to do that first. Once that's done, we can look into arranging the autoplay with Jay's Diamond Mind game. There are a few other things we need to establish as well, such as draft order, and PMing the next person on the list after a pick has been made.

Jay, will Diamond Mind accommodate the roster positions as outlined in my initial post?

I would love to join but...

with 2 kids which, one is a 20 month old, i can barely do fantasy baseball. My wife works from 6:30 in the morning till 6:00 at night so the only free time is during naps which are only 2 hours a day. sounds great though.

Mark, there will be a 12 hour time limit to make a pick, so that should work for most people. Once you've made your pick, it's your responsibility to PM the next guy in the draft order to tell them their pick is up.

Here's a visual example of the first few rounds of a history draft: 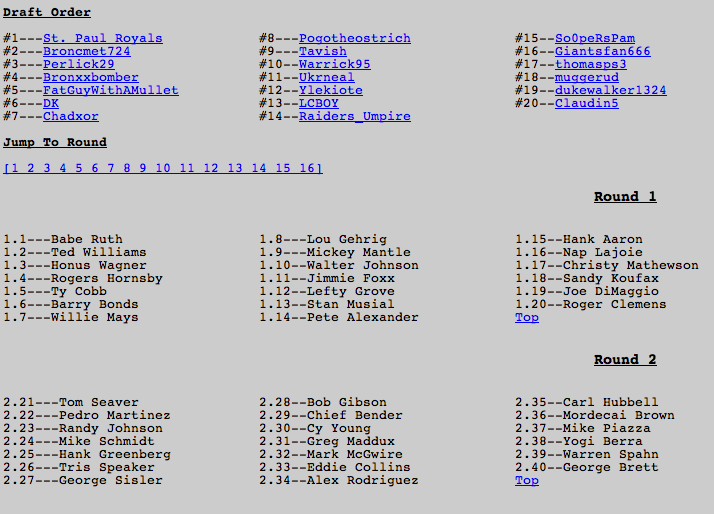 after players are picked is it automatic play. do you need to be at the computer once we get the players to play the game? i have been out of the tech loop for the last few years (those with kids will know what i mean) so i never seen Jays sim game. I am in if its easy to do...

Square_Frame_Ramly wrote:after players are picked is it automatic play. do you need to be at the computer once we get the players to play the game? i have been out of the tech loop for the last few years (those with kids will know what i mean) so i never seen Jays sim game. I am in if its easy to do...

I don't know anything about the game. My main concern is doing the draft (it's alot of fun to do in itself) and I'll let Jay take it from there with his sim. I think an autoplay sim would be ideal as it's less time consuming.
_________________

I have no idea what is involved here

I have no idea what is involved here

Great Gil, I was hoping you'd get involved. In the interests of keeping it simple, I don't think we'll allow trades during the draft. I will clearly set out all the rules for the draft once I open up a separate forum for this in the fantasy sports zone. It's not complicated, you just need to be ready to make your pick when it's your turn, PM the next guy after you pick, and make sure to fill out all the positions in your lineup by the time the draft is finished.

update: I've opened up a new subforum in the Fantasy Sports Zone and will move this thread over there once we have at least 10 participants

This will be fun....if there is a simulation involved it will be a lot funner and the picks will be more varied as you should be able to take guys like Riggs Stephenson, or Lyman Bostock. (short, but outstanding careers)..however with only 10 teams there will be plenty of players available for all positions to make it interesting.

Ben I would love to play.

Give me a few days to root around in the game again. I have played it since I bought this computer a little over a year ago. If we want to go the sim route, we are most likely going to need a full roster as the game will want players to use for PH, relieving, etc. Given we are using the whole history of the game, filling a 24 man roster shouldn't be an issue.

Jay, does diamond mind cost money? I'd like to keep this free. I've looked at some of the baseball sims including DM and they all seem to charge a fee per team. I'd be happy just doing the draft and discussing the relative merits of our teams and opening a vote to the whole board on which team would be the best. A sim would be cool too if we can do it free.

The only cost is buying the game. I already have the basic disk and some of the past years disks. I played the 1887 season and piloted the Detroit Wolverines.

If there is a cost, it would be to get the data disk/s of the players to be able to run the sim. I won't be able to to load the game or check things out until this weekend. If we need data disks, it wouldn't cost more than about $50. At $5 person, that's not bad.

I'll give it a try, LMK what to do.
Jerry

Great stuff guys, we now have 10 participants. Still room for more, but we have enough now to do the draft. I will leave this thread here until tomorrow just incase anyone else would like to join. Then I'll move this thread to it's new subforum in the Fantasy Sports Zone, and I'll post the rules and draft order. Hoping to get started by Sunday or Monday.

I've added everyone to a usergroup entitled 'Historical Fantasy Baseball' so you can send a PM to the whole group at once if needed. I will use this feature to alert everyone about the start of the draft.

The participants so far are as follows:

Jay, I think we'll go ahead with the draft with the 15 rounds as planned. If we decide to go with the simulation game afterwards, we can easily extend the draft 9 more rounds to accommodate the extended rosters of the sim. Sound good?
_________________

So once we make a pick, we post it here?

Orioles1954 wrote:So once we make a pick, we post it here?

Nope. Everything will be held in the fantasy sports zone. I will get us set up there shortly, including the rules and the draft order. Then I'll make a post saying "ROUND 1" and the order of that round. People will pick in that order. After you post your pick there, you PM the next guy on the list to tell them it's their turn. When R1 is finished, I'll lock the thread and open up "ROUND 2" and so on. It will all be very clear once I get the subforum ready for us